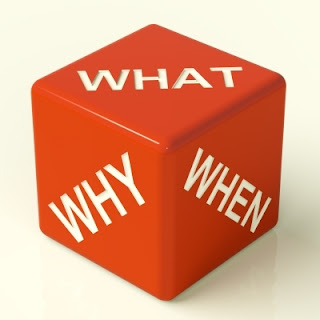 What is frequently the first question we ask when faced with a challenge.  What is the problem and how can we solve it?    Many of us are quite pragmatic and just want to get it solved and move on.

But at a recent Company of Women breakfast, I learned that perhaps this wasn’t the best way to tackle problems. While I was asking the right questions, I was doing so in the wrong order.

Instead of asking what the problem was, I need to go back and ask myself why. Why is it a problem?  By probing into the why, I learn more and can generate more solutions on what to do next.  The order, explained Karen Kessler, should be why, how and then what.

But when we took a step back and first asked why, to which the answer was that this person’s performance was creating delays in product delivery and impacting morale within the team – the answer became even clearer – he had to go.

While the end result was the same, you could see how when you ask why, you got to the big picture and it became much easier to make and rationalize that tough decision.

It struck me that we maybe need to ask why more often, because when we know our why, it becomes easier to stay on track.   Why do we want to explore a certain business avenue? Why do we want to write a book? Why are we procrastinating on getting something done or starting a new program?

I throw this last one in because in asking why we are procrastinating, we can dig deeper on what is holding us back.  One answer may well be that we really don’t want to do it, and if that is the case – then don’t.  Take it off your to-do list.

I remember years ago being super-hesitant about getting involved in social media.  As far as I was concerned the jury was still out on whether this was an effective way to market your business, so I procrastinated on entering this particular arena.

Clearly I changed my mind, but at the time I was making all sorts of excuses – mainly that I didn’t have time.  Until you see the merit of taking on something new, or you can get over your fear of stepping out of your comfort zone, nothing happens.  Perhaps if I’d asked myself why, I would have stepped off the fence and started earlier

If you are hesitating on a decision, ask the question why.  It may lead you to the real reason and then you can move forward or not, but you do so having thought through the implications.
by Unknown 1 comment: 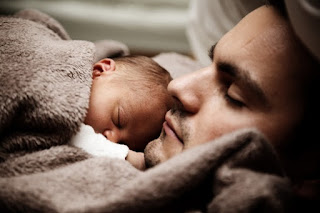 Imagine, says Anne Marie Slaughter, a race – one person has a knapsack on her back, full of weights, and the other has nothing.   Who wins?  The man, of course.

That’s because women still have the bulk of “care” duties associated with running a home as well as holding down a career.

It’s not the man who receive calls in the middle of important meetings that a play date has fallen through.

None of that will change until we, as a society, she went on to add, start to place value on caring and that the role doesn’t automatically fall on the women’s shoulders.

Anne Marie, author of Unfinished Business, was speaking at the Art of Leadership for Women this week in Toronto.

Her father was a lawyer, her mother an artist who also stayed home to raise her family.     However, if her mother ever said she was a homemaker, then she was dismissed as a nobody.  Being an artist on the other hand gave her some clout, regardless of whether she actually sold any paintings.

When her own sons were teenagers, Anne Marie decided to take a two-year leave from her position with the Secretary of State Office.  People really were puzzled by this decision – deciding she was either not that ambitious, or not that good at her job and had been asked to leave.  She was systematically dismissed because she was taking on the homemaking role.

Little did they know, she jokes, that she refused to cook, sew or iron.  In fact for most of her illustrious career, her husband was the lead parent, making sure her sons got to school, activities and so on.  She was the main breadwinner and the one travelling.

Part of the problem she feels is that while times have changed, we still tend to expect boys grow up and become the breadwinners, and the girls to become wives and mothers, with a career on the side.

While we encourage our daughters to go for it and that they can be anything they want, we also need to start educating our sons that they in fact could become the “lead parent” and need to ask themselves if they are prepared to move and adapt with their partner’s career.

What women want today is it all - the power …. and the shoes. She challenged the women in the audience to visit a local bookstore and check out the Parenting and Leadership sections . The topics, she observed are very similar.  It therefore makes sense that the skills we develop as mothers, can easily be transferred to the workplace.

Women have the management skills, but we need to develop the confidence that we have what it takes.  Let’s face it, she pointed out as mothers we are used to the unpredictable, we’ve learned to go with the flow.  Likewise in the corporate world, uncertainly is the one sure thing, so we are already equipped to handle fluctuating situations.

She then joked that this  however was not a good reason to have children, but more that parenting was a training ground for managers.

She was an entertaining, thought-provoking speaker who was able to articulate the challenges facing women today and offered a completely different approach to changing the way we think about and value the caring role.
by Unknown No comments:

Getting my mojo back 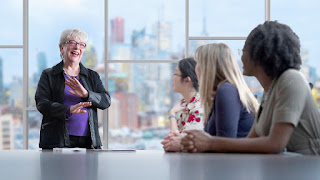 Often you can tell what someone’s passion is because their face just lights up, there is a brightness around their eyes as they talk about it.

I was reminded of that when I saw a photo of myself that was taken at the environmental photo shoot I wrote about a few weeks ago.  The photo is amazing. The photographer captured me in action, talking to a few young women… about life, work, and everything in between.

What struck me is that I don’t always look that vibrant.  Often these days I have a harried look as I try to fit more into my day, likely more than is humanly possible.  I often feel like the weight of the world is on my shoulders as I try to keep everyone happy – members, chapter leaders and yes, my family.  I am forgetting my own advice and taking life far too seriously.

When I came back from that photo shoot I remember being on a real high.  I’d not only enjoyed the experience, but as I wrote, I could see the merit in creating that personal experience for customers.

As we plan for the fall, I want to pay attention to these insights.  I have already realized that I need to delegate the paper work as I am getting bogged down in the detail and at risk of drowning in a sea of paper.  So before I go glug and under, it’s time to find someone who actually loves this type of work, because it ain’t me.

Like Phoenix rising, I am confident that if I get back to what I am good at and can spend more one-on-one time with people and small groups,  I will be a much happier camper and I will get back to being the gal in the photo.

Check out some photos of yourself.  How do you look?  Do you look happy with your lot in life, or are you, like me coasting, not doing what you are meant to be doing?

They say a picture is worth a thousand words, and from my perspective this one picture showed me what I needed to do, more than any conversation could.

Watch for the new Anne Day coming to a community near you.
by Unknown No comments: 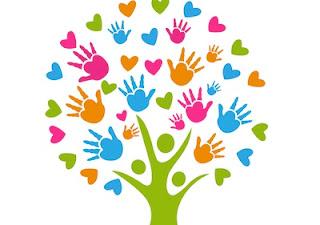 Some recent research has shown that in times of strife, such as 9/11, the number of suicides, people diagnosed with depression and incidents of violence, actually goes down.  It drops, when logically you would think it would increase under the pressure everyone is facing.

Why does this happen?  What they have found is that acts of terror, war or other life-changing community incidents tend to bring people together to form a united front. It is through that sense of community that the feelings of isolation dissipate and people feel needed and wanted.

Interesting.   It was a sense of isolation that spurred me on to start Company of Women over thirteen years ago.  I had a successful consulting practice at the time  and was working from home.  But I missed the camaraderie and conversations with peers.

I also wanted to meet some like-minded women who were on the same path as myself. I was the only one of my friends, at the time, to have her own business and while I was at  home, everyone thought I could just down tools and have coffee with them.  Er… no.  They didn’t get the time and commitment involved in starting a small business.

What I have discovered through Company of Women is that no matter what business you are in, the issues are often the same – finding customers, retaining customers, cash flow, human resources, etc… and yes, those feelings of self-doubt that creep in from time to time.

It therefore makes sense to problem solve together.  It makes sense to ‘fess up that all is not as rosy as we’d like it to be, because when we “do vulnerable” we can be surprised at how people rally round to help you, give advice and provide support.  And more, that you are not alone.

And what we are doing fits the definition of  community- “Self-organized network of people with a common agenda, cause, interest, who collaborate by sharing ideas, information and other resources.”

In other words, we are not just looking out for ourselves, we are invested in learning and helping others succeed and in doing so, it would appear that we are also keeping depression at bay.
It is through authentic, genuine dialogue that we become community.  Thank you for being part of mine.
by Unknown 1 comment: