All week we have been taping the webinars for our Five Days to Feeling Fabulous Online Health Summit and it has been fascinating to watch.  We have thirty women involved in this project, all experts in some aspect of the health spectrum and we’ve taken a broad sweep in our definition of health, to include how you look, because if you look good, chances are you feel good too.

The women are from Company of Women or the Clarity Centre and we have been meeting for several months now to plan this Health Summit, so the energy and excitement has been building.  Some are presenting information on their own, others are being interviewed and we also have a roundtable discussion about alternative health therapies.

But what has really surprised me is how good the women are;  how knowledgeable they are on their area of expertise.  I know, I should have thought that all along, but when you know people in a different capacity, you don’t always get to witness their talents.  You don’t always get to watch them in action. And I am learning so much too.

All of them, without fail, have been a bit nervous when they arrive, but once the camera starts rolling, they are terrific, just anxious to make sure they’ve covered their key points.

It has also become clear that each modality, often originating with the ancient Egyptians,  has a place in a wide spectrum of health care and that one treatment can lends itself well and lead to another.  One of the women commented on how much fun it has been to just get together with like-minded women who share a common passion of wanting people to be healthy and live a fulfilled life.

I am also learning that the abundance approach that we foster in Company of Women is perhaps more unique than I first thought and that in other groups, it is very much everyone for themselves.  Well,  right now I am proud of our Company of Women/Clarity community.

PS  Make sure you check out and register for our Health Summit – it is August  19-23, it’s free so treat yourself – www.5daystofeelingfabulous.com 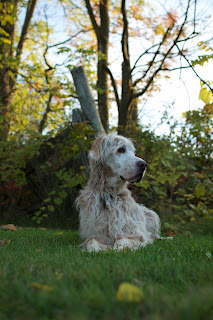 Last week we said goodbye to our trusted family dog – Henry.  He’d been with us for sixteen years which is a long time for a large dog, an English Setter.  I have to admit we’d joked he was past his “sell-by” date.

He actually nearly checked out earlier in his life.  When he was just a puppy he swallowed a corncob he’d stolen from the garbage.  It got stuck in his intestines and led to major surgery.  It was touch and go and we realized that we’d forked out a lot of money, that we could ill-afford at the time, for a dog that might not make it.

But he did, and we actually had a repeat performance of that surgery years on, but then it was twigs and leaves that he’d eaten.  Henry’s love of food, and all that is not edible, was one of his quirky qualities.

When he was a puppy, he ate anything – and I mean anything - from twenty dollar bills, socks to even our marriage certificate.  Nothing was safe if it was within his reach.  I remember having a party and when my back was turned, he was up at the dining table inhaling half a dessert in seconds flat. He had rather a sweet tooth.

And as for his love of chocolate, he defied all wisdom that chocolate was poisonous to dogs, as he was rather partial to it, and given any opportunity would steal it whenever he could.

He was a gentle dog and when Sophie, his younger, adopted sister arrived on the scene, he took it in his stride.  At first he questioned who she was, but ever the gentleman, would give way to her more assertive demands.  They made a great pair, and when we lost Sophie a couple of years ago, he missed her.

Latterly, like any senior, he was a tad forgetful.  You would put him outside and he’d stand, gaze around and you could almost hear the wheels turning as he asked himself “now what am I supposed to do?”  He’d bury his bones and forget where he’d left them and would be digging around the garden, creating big holes as he tried to find them. Just like the hole in our hearts, now he is gone.

We learn so much from our pets -  about caring for another being, about love and affection.  No matter the pain when they are no longer with us, they bring such joy and happy memories.  What more can we ask of man’s best friend?  Go in peace Henry.

Map reading - for the tourist and small business owner 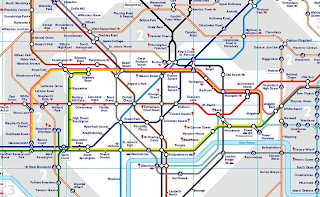 Have you ever been to London, England and used their underground system, the Tube?  When you first look at the map, with its 14 coloured “lines” taking you across the city and beyond, it can be overwhelming.  I chuckled to myself that if you were colour blind, you would really be stuck.

Within each service line, there are junctions when you can change and go into a different direction, but the key is to work out your end destination, and from there work back on which is the best route to use to get there.  And there is never just one perfect way, so if there are problems en route, you can change course, go to another station and attack your journey from a different direction.

It is actually a very efficient system, and with a day pass, we were able to hop on and off, depending on where we wanted to go.  The trains are pretty frequent and if your plans changed, you just go on another route, which is what we did because we also walked a lot around the city and would end up having to find the nearest station and travelling from there.

All very nice, you may be thinking, glad you enjoyed your trip to London, but what has this got to do with me?  Well actually I see a straight correlation to starting and running a business.  There’s no one route to success, some of you may be on the fast lane, taking the most direct and shortest route, while others get sidetracked or take a more convoluted path to get there.  Sometimes we hit on roadblocks, but as we found with the Underground, you just “recalculate” your route and make the necessary changes.

The underlying key is that you have a plan to start with, where you have documented what you want to do and how you plan to get there.  Knowing what you want to achieve, makes it much easier to determine if you’ve actually got there or not.  Otherwise, just as the first inspection of the Underground map can seem overwhelming, so too can be starting a business without some sense of where you want to go.

Somehow getting off at the wrong station or taking a wrong turn in your business, is less scary, because you know there are alternate routes to get there and you can still reach your final destination, which may well change as your business evolves.

Just as the map you are given at the Underground is pocket-sized so it is easy to take with you, so too can your business plan be compact.  It doesn’t have to be a 150-page document.  In fact there are books out there promoting the one-page business plan, which still demand the same due diligence and thought process as a more formal plan you might do for the bank, for example, but mean that you are more likely to check in and see if you are on track.

Whether you are travelling or growing your business, it helps to know where you are going and if you are headed in the right direction. What you don’t want is to get lost – be it in London or in life. Take time to make a map for yourself.
by Unknown No comments: