Switching back on. Slowly. It’s Thursday.   I have to write my blog.  After three weeks (and two days) away on vacation, it’s been a tough week trying to switch back on.

I can’t remember when I last took that amount of time off … and I  mean really off.  My business was totally off my radar.  We were travelling, meeting with friends and being the tourist.  Lots of fun, new memories were created.

I highly recommend it, but have to say ramping back up is challenging.  And perhaps if I am being honest, I don’t want to.   I still want to bask in that mellow, free feeling of being Anne Day, not Anne Day, business owner.

However, reality is that I do need to get myself into gear.  There’s just one week left until it is back to school, back to work and a whole new year of programming ahead of us at Company of Women.

I remember when my girls were young having such mixed feelings about this time of year – longing for them to be back at school, and back in a routine, but dreading the thought of the school lunches and homework, and being back in a routine.

I know I am not alone with these mixed emotions.  Summer is such a short but special time.  One that I think we need (and deserve) to energize ourselves – both physically and mentally – for the year ahead.

How do you get yourself ready for the fall?

And with it comes a fresh start, a new season and maybe even a new you!

Email ThisBlogThis!Share to TwitterShare to FacebookShare to Pinterest
Labels: back to school, fall, letting go of perfection, overwhelm 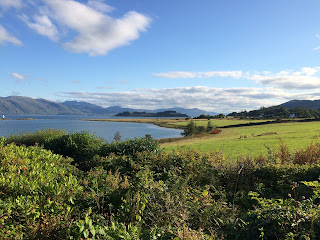 This summer I learned an important business lesson – when Plan A doesn’t work, be ready and embrace Plan B.   To allow the failure of your plans to overtake your dreams, just fosters further disappointment and festers away at your intent.

I had spent at least six months planning a big family trip to Scotland and the Isle of Man to celebrate our 45th wedding anniversary and 50 years of being together as a couple.  We’d decided to celebrate the 50 years now when we were all able to travel, rather than wait.

It was a complicated itinerary, as I worked to ensure everyone got to do what they wanted to do, and we also had some down time and space away from one another.

The first dent in THE PLAN, occurred before we left.  Thank goodness.  We discovered, by chance, that the airline we’d booked our tickets to get to the Isle of Man, had gone into liquidation.  So we had to scramble to get seats with another airline and as I write, we are still trying to get our money back from the first one, but not holding up much hope.

We had gone ahead of the “kids” and were collecting them in Glasgow to head off  together for a few days in the Highlands.   Except, last minute because a truck had hit their plane, their flight was cancelled.  It was 3.00am in the morning before they got checked into a Toronto hotel, where the three of them were left to share one bed.  Ever chivalrous, my son in law, spent the night in a chair.

A day late, we met them at the airport.  Now we’d had to move hotels, as there was “no room at the inn” where we were staying, and with two big concerts taking place in Glasgow, hotel rooms were scarce.  We ended up having to tough it out at a five-star hotel, which while lovely, was not part of our trip budget.

But I had decided early on with these unforeseen delays, that they were not going to spoil our vacation, which they could just as easily have done.  Instead I encouraged everyone to think about the great stories they’d have to share about what had happened.

And with one day short, we focused more intently on we wanted to do and see in the time left.

As leaders in our businesses (and families) we set the tone.  Being pragmatic and coming up with a Plan B is a good start, but so is having a good attitude.

As John Lennon once said “life is what happens when you are busy making other plans.”
by Unknown 1 comment: