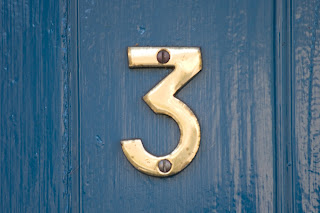 Have you heard about the rule of three?  It applies to several aspects in life, and certainly works well in business too.

I remember when I first started writing, my mentor told me that starting a sentence with the same words, three times in a row, helps to make a point.  It makes a powerful statement and I often use this strategy in my writing today.

The other week we heard from a speaker who was emphasizing the rule of three when you are making a presentation.

As you are developing your talk, it helps to come up with three key messages as more than that, and it starts to get confusing for your audience.

And in working with authors, I also have them work through a template where they have to come up with three key messages.  In this instance, it helps you focus and keep true to what you want to say.

But the rule of three expands beyond the written and verbal word.  In decorating for example, designers advise that you group objects in threes.  And I seem to recall doing an one-two-three countdown with my kids when I wanted something done or they were in trouble.

So what is the impact from a business perspective?  Good question.

Jeremy Anderberg wrote about the rule of three in terms of productivity.  He quotes author Chris Bailey when he suggests that at the beginning of each day, before you start working, decide what three things you want to accomplish by the end of the day.  It’s a simple, but game changing concept.

If you only have three priorities to focus on, you are more likely to get the work done.  And maybe if you’ve tried three times to start something and haven’t, your procrastination is telling you that you really don’t want to do it.

Here’s some other interesting facts about the number three, according to Eric Walters in The Rule of Three:-
It seems to be a pretty important number, and of course there is the fact that I was born on the 3rd month, March!  But I digress.

Getting back to the rule of three, here's my three key points -
Try it.  You may find that it takes the pressure off, and helps you focus your energy and time. 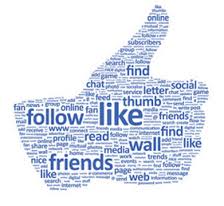 I am a relative newcomer to Facebook and I know people love communicating through this medium, but I have come to question whether it does more damage than good.

On the plus side it is an easy way to stay connected with friends, and like everyone else I enjoy the occasional cartoon and the philosophical posts.  But it can skew how you view other people’s lives.

From the outside looking in, it would appear that everyone has the “perfect” life, the perfect partner, the perfect children and a wonderful career and home.  But is that true?  Let’s face it, we can post what we want people to believe, when deep down we’re lonely, hurt and life isn’t so peachy.

My other concern about Facebook is some people just live there instead of in the real world.  Measuring their popularity and how much they are loved by the number of likes they get or “friends” they have.

Now that’s sad. I know I for one don’t do too many likes when I do go onto Facebook as usually I am just scanning to see what is current.

I use Facebook to inform and pass on great articles, thought-provoking quotes and the odd laugh.  Yes we promote our programs, but I wouldn’t want to bombard people as frankly that can backfire on you as, to folks like me, that’s a turn-off.

Like all social media, it is a fine line.  Much depends I guess on why you use it.  What concerns me is the power and impact it can have on your self-esteem and your relationships with your “friends.”

Guess I am an old-fashioned gal.  I prefer to get to know people face-to-face. I give myself a day off from time to time, so I don’t get suckered into the Facebook vortex.

What do you think?
by Unknown No comments: 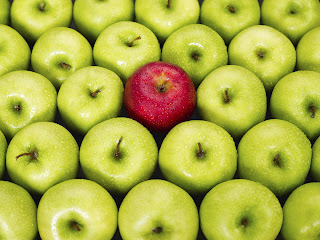 As the carousel revolved, I had a moment of panic, watching all the black suitcases going round and round.

I realized that because I was only in Ottawa for an overnight stay, I’d brought a different suitcase, one that was not labelled nor had any sign on it that would indicate its ownership.

Terrified that I would not identify my suitcase, I watched them all very closely.

Don’t worry, my case and I were happily reunited.  Part of my nervousness was that my “dress-up” clothes were in the suitcase and I had visions of myself talking at House of Commons in my jeans!

But there are some business lessons from this little story.

1.     You have to stand out.  In a sea of black suitcases, mine looked just like everyone else’s.

Just like my luggage, if you don’t do something different to stand out, you run the risk of fading into the background.

With your marketing materials, make sure it is clear how potential customers can connect with you.

3.     Protect your assets.  I quite easily could have had to make my presentation not dressed for the part.

Don’t leave it to chance that a key element could go missing.  Have a plan B, so you are ready to face any eventuality.

What did I do?  I went off and purchased a luggage tag, tied a sock to the handle and so the journey home was less stressful.

Take the stress out of your business – plan ahead and make sure your unique offerings are evident to all.
by Unknown No comments:

Supporting women is not a gender issue, it's an economic one 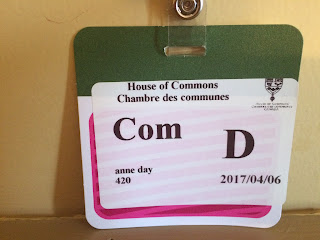 My worlds collided this week when I went to the House of Commons to speak about women’s economic security.

First, the theme for our conference is Speak Up. Stand Out. Soar.  So there I was on April 6, speaking out on behalf of women.

But second was my initial response when the invitation arrived.  Here I am having just co-authored Good Enough, a book on why women don’t feel good enough,  and I start to question why they have chosen me??

Initially I wasn’t going to do it, but I quickly realized this opportunity wasn’t about me and my nervousness, but about the women in Canada who deserve better.  So I went to Ottawa.

What did I learn?  First big lesson – seven minutes goes very quickly.  That was how long I had to present, and so I didn’t get to cover all I wanted to say.  Fortunately I can send in a further written submission, which I have already done.

Second, I got asked all sorts of questions about women on boards, women in skilled trades, seniors, compassionate leave – all of which made me glad that I take an interest in women's issues.

So what did I talk about? First had to be affordable child care as without it, too many women can’t work and their skills and talents are lost to the marketplace.  With the tragic case in Vaughan in the news this week,  I also highlighted that this is what can happen when parents desperately need child care and they chose what they can afford. This is the case where a child died and it was found that the caregiver had 35 children and 12 dogs in her care.

Having worked with abuse survivors and teen moms, I also talked about the needs of marginalized women and then addressed the needs of women entrepreneurs.

Several years ago I served on the National Task Force for Business Growth for Women through which we checked the pulse of women entrepreneurs across Canada.  We wanted to find out why women’s businesses grew more slowly in comparison to their male counterparts.

What did we learn? First the results were the same across the country – that women lack financial literacy; they don’t use technology to grow their businesses and they lacked confidence.  The latter being a big one, and it dovetails with what we learned doing our book.  I shared these results with the Standing Committee.

I also spoke about the need to support women over 40 in their entrepreneurial endeavours.  If you are under 39, there are all sorts of resources you can access, but one year later, you are out of luck.   My recommendation was that they expand the mandate and funding of Futurpreneur, a successful program that provides loans and mentoring to the start-up business owner.

Another glaring gap that I addressed was the lack of a federally funded women’s enterprise centre in Ontario.  Every other province has the benefit of such a resource, except Ontario.  Time for this to change.  My suggestion was to bring the Ontario based women’s business organizations and networks  together to share best practices and work out how such an enterprise centre could operate and be funded.

Creating a level playing field for women is not a gender issue, it is an economic one. When women succeed, everyone benefits – families, communities and business.