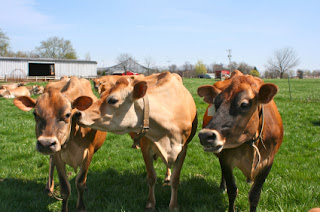 I know.  I said I wouldn’t write any more about the puppy, but you know he provides such great business/life lessons, that I couldn’t resist sharing this one.

He’s a handsome fellow, now a year old, completely trained and knows the rules. Because he’s been so good at sticking to his “territory” we’d taken to shooing him outside when he needed to go.  And in the cold weather, we were more than happy with this routine. He would go outside and bark when he wanted in.

All was well.  Until Tuesday.  When he decided to explore and visit our new cows, ten of them, and the bull.  He thought it would be fun and games as he played in their field, darting in between, getting them to chase him.  My heart was in my mouth as I watched him, thinking just one kick from the bull and it could be game over.  No matter how much we called him, he ignored us. He was having way too much fun, not realizing the danger he was in.  Eventually he came out.

But we are watching him like a hawk again.  Putting him on a leash so we can keep close tabs on him.

To me, it illustrates that no matter how much we trust people, and you think they know the rules of the game, you can’t just assume all is OK.  You have to keep your eye on the ball – be it staff, clients or competition.  Just because something appears all right, well, maybe it’s not.

Now, I am not suggesting we all get paranoid about schemes, plots and theft – more that we can’t afford to get complacent.  We can’t afford to ignore small signs, red flags that make you suspicious.  We can’t assume that others will behave the way we would.  Sadly not everyone works with integrity.  So listen to those nagging doubts, they may be telling you something.

As for Brodie – his little frolic in the field has cost him.  He needs to earn back our trust that he will stick within the boundaries of “his space.”  Until then, we’re watching. You could say, like a teenager caught breaking a curfew, he’s grounded.

And I suspect, it is going to be a l-o-n-g summer.
by Unknown