Out of the mouth of babes 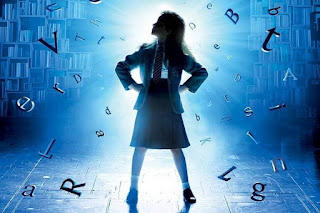 Last week I attended Matilda.  For those of you unfamiliar with the Roald Dahl’s story, it is about a little girl who has the misfortune to live in a home where the parents couldn’t care less about her and who attends a school where the principal feels children are just maggots.

Not much of a life for a child.  You will be pleased to learn that there is one character, Miss Honey, who does take a caring interest in the child.  But in one of the Matilda’s songs, she has a strong message for all of us.

Here’s just some of the lyrics:

Just because you find that life's not fair, it
Doesn't mean that you just have to grin and bear it.
If you always take it on the chin and wear it, nothing will change.
Just because I find myself in this story,
It doesn't mean that everything is written for me.
If I think the ending is fixed already,
I might as well be saying I think that it's OK,
And that's not right!

Interesting.  An important message for any of us who may be feeling stuck, who see no “light at the end of the tunnel.”  As Matilda says, if we do nothing it won’t change.

As we start a new year, what changes could you make?  As Matilda says, just because life seems predictable, doesn’t mean you have to subscribe to the ending you think is written for you.

Following extensive research, Amy Vodarek and I are finishing off our book Good Enough? which is coming out this Spring. After connecting with over 350 women, we’ve learnt more about how and why women suffer from self-doubt or feel an imposter, all of which holds them back from realizing their potential.

But it doesn’t have to be that way.  Many of the women described digging in and making new and often difficult choices. But one’s for the better. It means we have to reflect on what is happening, both past and present, ask ourselves tough questions and look at small steps we can take to change the situation and take charge of our lives.

Because as Matilda says, to stay stuck, is not right.