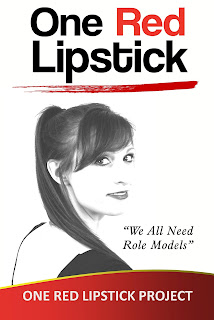 At the recent launch of the One Red Lipstick book which shares the stories of 24 entrepreneurial women from across North America, we asked some of the authors to share their message from the book.

Up first was fashion icon Linda Lundstrom, who started off by saying her message was that “shit happens.”  And she should know as after 26 years of a successful fashion design business, the bank called in her loan and she had to declare bankruptcy.  But she bounced back and has started over.

As did Nadja Piatka who in debt and recently divorced, decided since no one would hire her, that she’d hire herself.  She started off by baking and selling her muffins to the local coffee shops.

Fast forward to today and she has a multi-million business and her muffins are sold in McDonalds, Subway and other food chains.

Her message was that it’s not so much that you fall down, it’s how you get up after the fall that matters.

For Che Marville the key was to recognize our vulnerabilities and to share with one another because there was strength when we walked the journey together hand in hand.   She also spoke of the power of listening to your intuition, just as her mother did when Che, as a child was deathly sick, and her mother insisted that she be transported back to Canada, even though the authorities and doctors were reluctant to do so.

And for Anastasia Valentine who became a teen mother at 15, it was important not to let other people define you.  To set the bar and hold your head high helped her navigate her early parenthood and she went on to become the CEO of a successful marketing business, when she could have so easily allowed the stigma of being a teen parent hold her back.

While the stories of these four women were dramatically different, as are the others  in the book, the one common thread is one of resilience.

All of the women in the book faced some obstacle in their lives that they had to overcome, accept and move on from – and they did so with tenacity and fortitude, forging on to carve a life of success on their own terms.

It wasn’t a competition as to who had it worse, it was more that the women were willing to share, to be open about the trials as well as the triumphs in their lives and it gave those listening hope and inspiration, something we all need.

The documentary One Red Lipstick will be coming out in May, and it bound to bring even more glimpses into the lives of real women.  Real lives, real challenges and real victories.
by Unknown

It was an amazing and inspiring evening for all who attended Anne. To be in a room filled with THAT MUCH energy was an empowering feeling. I am looking forward to all that One Red Lipstick will be sharing with the world.

I agree...it was an amazing evening and I left so full of energy and inspiration!
My daughter is the same age as Spenser Chapple and she is also an entrepreneur! I made sure to purchase her a book along with my own so I can share these awesome stories of resilience and strength with her as she begins her own journey.