How to spot a liar 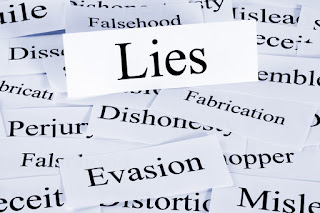 Did you know that 3.7 Trillion dollars is lost globally through fraud?  Or that 15 billion employees steal from their retail employers every year?  And in the workplace, one out of five people lie or cheat in some way.

Pamela Meyer, author of LieSpotting was sharing these scary statistics with the audience at the recent Incentive Works conference.  Through her presentation she gave us tips on how to detect deception, and it was fascinating.

Using video clips, she illustrated different people, mainly men, who are known now to have been lying.  She started with Bill Clinton, showed Bill Cosby, Rob Ford and then Lance Armstrong.  Powerful evidence of how even on camera an expert can detect the tell-tale signs of lying or stretching the truth.

Why do people lie?  In her research she found that 36 percent are people living beyond their means, 27 percent had financial difficulties, 19 percent were close to the vendors and 14 percent had control issues.

So what do you look out for?  When the person is swaying from the truth, they tend to use more language in their denial – saying did not instead of didn’t, distancing themselves as in Clinton’s case when he talked about “that woman.”

Sometimes, it’s a slip of the tongue that gives them away.  In the case against Susan Smith who had murdered her children, she talked about them in the past tense before it was known that they were dead.   When someone says in all honesty – listen, because likely it’s not.

Other times the person will rabbit on, not answer the question or will minimize the charges.  The example she used here was Rob Ford, but several of us in the audience could also think of another politician who avoids answering questions.

One of the most interesting insights she revealed was when a person is telling the truth, say their travellers cheques have been stolen, they are light on detail and cut to the chase to explain their dilemma, often ending somewhat emotionally.

Whereas, if the person is lying, they give scripted, detailed step-by-step explanations, and rush at the end.  Very telling.  Her suggestion was that when someone is telling you a story and you are not sure if it is true – map it out – check it against the patterns she described.

Body language is a biggie.  Eighty percent of our communication is non-verbal and often the body language is a real giveaway as to whether the truth is being told.  Examples would include lipsmacking, grooming gestures, hand wringing, excessive sweating, closed eyes and slumped posture or cowered voice.

It’s important she shared that you get a baseline on the person so you are not jumping to conclusions.  Other behaviours to observe would be the blink rate, fidget patterns, postures, hand-leg gestures.   The key is to build a rapport with the person so you can get to know what is normal and what is not.

Facial expressions are another clue – the look of contempt – one lip curled up (she used Trump as an example here) or nodding your head as you say no.  Oprah’s interview with Lance Armstrong is a classic example of someone dodging the truth.

While her presentation was entertaining, she gave us something to think about and watch for.  So often we take what people tell us at face value.  But maybe we shouldn’t.

PS.  I use the expression to be honest or in all honesty a lot… so clearly I will need to watch my language, so just know I am telling the truth. Honestly.
by Unknown