Are you tapping at the right window? 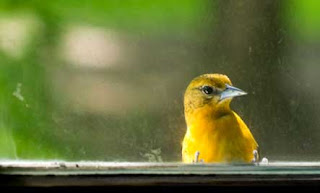 For the past three weeks a small yellow bird has been tapping at different windows of the farmhouse.  He starts with one and then moves to the next, systematically working his way around.

At first I thought he wanted to get inside, but after making a few enquiries to my country friends, it turns out it is mating season and the bird, on seeing his vision in the window is attacking his assumed competitor.   Fascinating.

We actually could learn some business lessons from this young bird.

1.              Wasting time
If we use our time attacking or obsessively watching our competitors (real or otherwise) we are wasting our time and energy which should be focused on what we want to do, not what others are doing.  Yes, pay attention to what your competitors are up to,  but don’t let their strategies force you to do something you don’t want to do.

2.              We get in our own way
My feathered friend is so persistent on attacking himself that he is getting in his own way of success.   He needs to be out and about strutting his stuff, instead of attacking my windows.  Often we can get in our own way, doubting our abilities and holding ourselves back from the success we deserve.

3.              Know when it is time to change direction
Now this one is harder for the business owner but watch for signs that perhaps, just perhaps, you are heading in the wrong direction and it is time to give up and move on to something else.

4.              Make sure your persistence is not misguided.
After three weeks, the bird is beginning to look frazzled and while you admire his tenacity, you have to ask yourself whether he is focusing on the right thing. My poor lad is not going to get anywhere, regardless of how much he tries to eliminate the supposed enemy he sees in the window.  All he is doing is exhausting himself and we can do that too when we insist on pursuing the unattainable.

I haven’t seen him for a couple of days, and my hope is that he’s changed his plans and maybe even got luckyJ