Canada geese show us the way 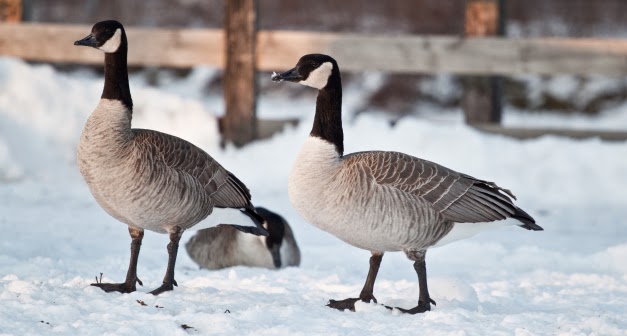 A few weeks ago out of our back window I watched a gaggle of Canadian geese gather in our field.  There had to be at least 30 of them.  Clearly a networking meeting!  Word was out – this was a happening event.

As they moved from one spot to the other, one led the way, and they walked single file into the next field.  But two were left behind, still sitting in the snow all curled up.  I watched anxiously, were they OK?

Sure enough, they were.  And one went back to collect the other, and somewhat late, they followed the path to where the others were.  There they gathered, nibbled on our corn which has still to be harvested, and prepared for the next move.

By this time, they had broken up into smaller groups – some taking off in flight, some staying put, and others resting. Fast forward to this morning, and just two are resting in the field – maybe the same tardy pair from the day before. Clearly they’ve decided being part of a group is not for them.

Seems to me that they are just like a networking group.  They follow a leader who shows the way, no one is left behind but may just be slower to catch on, and then they find ones who they feel more connected to and hang around with them.  Or they decide that the group is just not their thing.

As a group they sure made enough noise – attracting attention to themselves and maybe that is what we need to do too.  With International Women’s Day just behind us, perhaps we need to speak up about what we need to lead a fulfilled life – one where we are not overwhelmed by what is expected of us, by others and by ourselves.
by Unknown