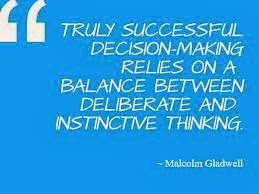 When you are making a major change in your life – personal or professional – how do you go about it?  Do you make the decision and forge ahead immediately or do you ponder, reflect, and slowly implement your plan?

I have realized that I tend to act differently depending on whether the change impacts my personal or business life.  Take our recent move from our home of 28 years.  It has been a very gradual process and over the last three months since we sold the house, we have been moving stuff out of the house, box by box.  So when it came to moving day, it was only big furniture and by that time, I was so sick of sorting, packing, and unpacking that I just wanted it done and over with.  There wasn’t the emotional tug I expected.

In hindsight, this was probably the best way to go, rather than the traumatic move all in one day when we just move out and close the doors for the last time.  Looking back, we did the same when we emigrated to Canada.  We could have just flown over and in eight hours arrived in Canada, but instead we chose to come over by ship – a Russian ship – which took 10 days and arrived in New York – a whole other story.  But it was a gentler way to leave one country and arrive in another.  Plus truth is, we were exhausted after a slew of farewell parties.

Yet in business, I find that when I make a decision, I often act on it straight away, especially if it is a bright, new shiny idea that I want to implement.  Much of it is about seeing opportunities, and leaping in. And sometimes that works, but sometimes it doesn’t.  A little more time thinking through the implications and nailing the details, might have saved me some grief down the road.   But when it has worked, it’s been glorious.

Years ago I remember Cora Tsouflidou of Cora’s Breakfast and Lunch sharing that when she has to make big, tough decisions she would check in with her head AND her heart.  Sounds like good advice, because whether you are right or left brained, listening to both can help you weigh up the odds.

Our slow transition from one home to another, made it easier for me to move on and get excited about the future.  Likewise, in business, when there’s a lot at stake, I am learning that it may be better to think it through and plan, rather than taking that instant leap of faith.  But knowing myself, the process can’t take too long, or I lose interest and move on to something else.