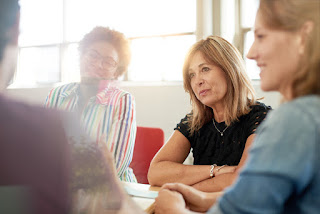 This was the first sign we saw as we entered the Pennsylvania Convention Centre.  It quickly brought home the difference between living in Canada vs. living in the United States.  No wonder there are so many shootings there.  It is obviously a norm that you may carry a gun.

Because Michelle Obama was speaking, security was tight, as it should be. Heaven forbid someone took a shot at her.

One of the reasons I wanted to go to the conference was just to witness how other groups manage their events, but my lowly 200 does not remotely compare to the 12,000 there.  Imagine 12,000 women and a few brave men in one room!

I am still digesting all that I learned that day, but overall the message was that it’s time for us to speak up as women, to find our place at the table and if we are not going to do that, then move over so another woman can.

Given all that is happening in the US – politically, the shooting in Vegas, floods, and earthquakes, there was a serious undertone at the event.  It doesn’t mean that there wasn’t laughter or fun, but people were aware of the strife and suffering around them. It was hard to deny.

Brené Brown tackled it head-on.  She lives in Houston and shared that her home was one of four on her street that had survived the hurricane, but only because they’d recently rebuilt with a stronger foundation.  Her husband went out on his kayak to try and help people, and as she said, “it doesn’t matter how you voted, we are here to help.”

Brené advocated that now is the time to come together, to help each other, regardless of our colour, faith or political stripes.  “People, she said, are hard to hate close up. Move in closer.”

She also encouraged the audience to connect with one another.  “Be civil and talk.” she advised.  She wants us to walk through the world with a strong back, soft front, and a wild heart.

The conversation between Michelle Obama and Shonda Grimes echoed the same sentiments.  No one was denying the recent tragedies.   Michelle was relaxed and real, especially when, with great humour, she described the challenges of raising teenage girls. Listening, you felt, she’s just like us.

Before becoming First Lady, Michelle was a typical working mother, juggling all the different roles and she spoke of the time constraints women face but also said that she would start her day with exercise. She was determined to eke out this time for herself.

Asked what was next for the Obamas, she answered with a smile, that right now they were just chilling, given the pace of their lives for the past ten years.

She is writing a book which will come out next year and wants to focus her energy on making life better for young girls. Often, she said, “there are rules that slowly suffocate young girls.”  They are like thin cuts, paper cuts that leave scars and eat away at their self-esteem.

She also wants to see training for future women leaders and more women entering politics.  “It is important to make way for new people. The seats, she observed, belong to the country, not the people elected.”

As she described her childhood, where her conversation at dinner was respected, not dismissed, you can see why she is so grounded.   The session ended with Barack Obama coming on screen to celebrate their 25th wedding anniversary, which brought a big sigh from the women in the room.

Just being in the same room as Brené and Michelle was almost an out-of-body experience.  It was hard to believe that they were there, talking to us. They were funny, real and authentic, advocating for the strength of women.  As Brené said, true belonging is the courage to believe in yourself.