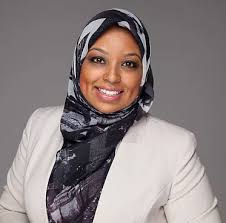 That’s what Ginella Massa believes got her to where she is today  -  the first hijab-wearing woman to be an anchor with a major Canadian TV station.

As I listened to her talk at a recent Women of Influence event, it struck me that these are three key ingredients vital to success for women entrepreneurs too.

She credits much of her persistence to her mother.  When Ginella went to school in Toronto, there were only two girls wearing the hijab – Ginella and her sister.  Her mother lobbied for their religious celebrations be respected at the school, and Ginella learned that first, you have to ask.  And if that doesn’t work, ask again.

Following her studies at York University and then Seneca College, she started to pursue her career in broadcasting.  She wanted her voice to be heard as a woman, a woman of colour and as a hijab-wearing woman.  But she also knew that she’d have to work harder, aware that wearing the hijab could be the death knell for her career.

Much of her early career was spent behind the scenes as a news writer and producer.  But Ginella’s dream was to be on television reporting the news herself.  In a leap of faith in 2014, she quit her full-time job so she could focus her energies on making that dream a reality.

Three times she applied for a position in Kitchener-Waterloo.  The first time when she got turned down, she decided to get more training and volunteered at Rogers.  The second time she was informed that they’d filled the position internally.

The third time, she got the chance.  “I’ve learned to be my own cheerleader. Unlike others in this industry, I didn’t have the networks.  I couldn’t draw on my parents’ connections. I had to create my own network.” she shared.

Ginella demonstrated her resourcefulness when she shared the story of an interview that took place in a restaurant.  She arrived early and the waitress recognized her and was quick to tell her how wonderful she was, and so on.

After a moment’s pause, Ginella went back to the waitress and asked if she’d do a repeat performance, in front of the two men who were interviewing her. And she did.   When asked if this happened to her often, Ginella was quick to smile and say “yes.”

But in some ways, that wasn’t stretching the truth in that when she first arrived on the Toronto scene as an anchor at CityNews Toronto, her story caught media attention.  Her story appeared in The New York Times, Vogue, FLARE, Aljezeera and the Washington Post.

However, not all the attention was positive and she also received her share of hate emails and tweets.   Racism, she observed, is often the elephant in the room. “We fear what we don’t know.”   And she could tell when people were giving lip service.  It would the tone of their voice or the back-handed compliments.

All of which left her feeling at times that she wasn’t good enough. “Your own self-doubt  can become your biggest barrier to success.”  We are our own worst enemy and it becomes a self-fulfilling prophecy.” she cautions the women in the audience.

Ginella was quick to say at the beginning of her talk that she preferred to talk about representation, rather than diversity, which she feels can get laden with tokenism.

She feels her role is to report the news, which at times can be challenging and upsetting to her personally,  but she remains professional feeling that she’s not there to talk about or defend her religion.   She just happens to be a hijab-wearing woman reporting on the news.

Being the first, the trailblazer takes guts.  You’ve got no role models to follow, you are paving the way.  And there are times in our own businesses, that we are carving out our own path, breaking down barriers too.

Ginella’s story was inspiring.  Her lovely smile drew you in and the standing ovation at the end of her talk was well-earned.