Leadership lessons from the stage 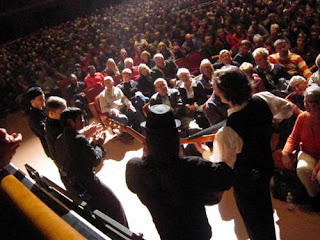 "A leader...is like a shepherd.
He stays behind the flock, letting the most nimble go out ahead,
whereupon the others follow, not realizing that all along
they are being directed from behind."

And you just never know where or when you are going to learn some important leadership lessons.   Recently I witnessed true leadership when musician Jesse Cook performed on stage in Guelph.

How?   As a Juno-award winning musician, he has a big following and it would have been all too easy for him to just perform on stage and take all the limelight.  But he didn’t.   Here’s some of the business lessons I gleaned from watching him on stage.

Lesson #1 – Build a team of people who bring different talents to the group.
Like all good leaders he has surrounded himself with extremely talented people, who can play a wide range of instruments, many of which I suspect he can’t play.

Lesson #2 – Let each person in the group shine and showcase their talents
Throughout the concert, each player in the band was given several opportunities to do a solo, enabling them to highlight their specific skills and feel part of the group’s success.

Lesson #3 – At meetings, introduce your team so clients know who they are
Jesse made a point of naming his colleagues whenever he could.

Lesson #4 – If people have been on your team for many years, acknowledge their contribution
It was impressive to hear how long the musicians had been playing together.  It also gave credibility to the group and spoke to how cohesive as a team they were.

Last, it speaks again to Jesse’s leadership style.  It wasn’t all about him.  He was the shepherd.

Great Blog Anne! I love leaders who are confident enough in themselves to allow others to have the stage and own the audience. Being behind the scenes is often the most important place to be. I totally loved this blog and the message in it!