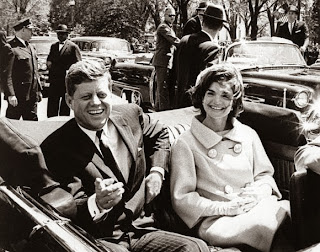 Where were you on November 22, 1963?  For some of you this may be before you time, but for me, I was a twelve year-old living in Edinburgh, Scotland and it is a day, like many, that I remember vividly.

For those of you who have no recall of what happened fifty years ago, it was the day that J.F Kennedy was shot and assassinated.

I remember I was at home that night watching “Emergency Ward 10” a popular British TV show when they interrupted the show with breaking news.  That in itself was unusual, and I remember our horror at the news. My mother was in tears.

As a young tween on the brink of adulthood, I was aware of world politics and JFK really inspired me.  He seemed such a hero, young, handsome and demanding change in the way the world worked together.  I was so moved by his tragic death, that I actually wrote to Jackie Kennedy sharing my sorrow at what had happened to her and her young family, let alone the world. To me, his profound statements provided such wisdom.  I believed he could lead us into change, into peace.

Of course, as an adult I have since learned more about the affairs, the adultery and manipulations, but you know what,  Kennedy, whatever he did,  was the first person to interest me in politics. He caught my attention to what could be, if we allowed it.

It makes you wonder what if… But we will never know.  We can only speculate and what his death and life teaches us, is unfortunately what you see is not always what is real.  Such a hard lesson to learn after my teenage fantasies of a man who I thought could change the world and bring peace. But who knows, maybe he could have.  But we will never know.

It makes you realize that what this world really needs are true leaders, ones who will capture our hearts and souls and who will lead us to a future of hope, love and peace. Something I sought back when I was a teen.
by Unknown