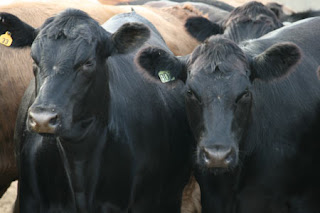 We have eleven black Angus cows on the farm this year, and when we first got them, they would advance towards you in a row – sort of like the cowboys in Magnificent Seven, except there’s eleven of them – all sizes and including some calves.

At first they all stuck together, the leader moved and they all went with her, but as they became more comfortable with the space and each other, they've sometimes branched off and explored on their own.

The other night, they were making a dreadful racket and apparently a snapping turtle (who knew they existed) had bitten one of the cows, and as a result she was crying out in pain.  The others joined in, rallying round with sympathy and support.

It always strikes me as ironical that as a city slicker, with a business named Company of Women (acronym  COW), that I should end up living in the country with cows. Who knew?

As an aside, yes, I was aware of the acronym when I started the organization, in fact, my first newsletter was called News from the Field.  I figured that those who got it would get a laugh, and those that didn’t… well, too bad.

But I digress, what has struck me lately is that our cows and Company of Women actually have even more in common.   Instead of a herd, we are a tribe and just like the cows, we come together, go off and do our own thing and come together again, especially when one of the group needs support.

Being part of community that cares makes life so much more meaningful.  You have someone who will watch your back, will “cry out” just likes the cows when you are hurt and boost your morale when you need cheerleaders or just cheering up.

We all want to belong and when you are a solopreneur or even when you are at the top of your organization, it can be lonely out there.  That’s why it is so good to meet up with like-minded women who are on the same path, face the same challenges as you and who have the same passion for what they do and want to achieve.

As we often say at Company of Women, you don’t have to be alone when you own.