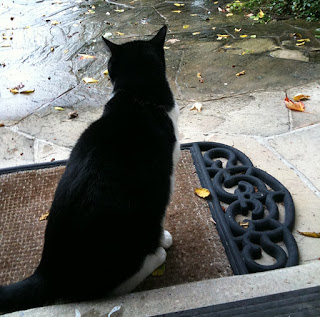 I had been looking after my daughter’s cat – Phoenix – while she was away on vacation.  Now Phoenix is an indoor cat who often sits by the back patio door looking out longingly at the great outdoors, anxious to explore it for herself.  So we take great care to lock the door after the dog has gone out as we don’t want her to escape.

So you can imagine my horror when I came back one evening to see a black and white cat sitting on the front door step.  My immediate thought and horror was that somehow I had let the cat out and my daughter would never forgive me.

On getting closer, I started to reflect on Phoenix’s colouring – all white, with some black.  This cat was the complete opposite – all black with some white.  In my panic I was struggling to remember exactly what Phoenix looked like,  so I was still second-guessing myself and rushed into the house shouting “Phoenix, Phoenix.” Timid by nature, she eventually showed herself and I gave a big sigh of relief when she appeared.

I had nearly scooped that cat into the house. Just imagine my daughter’s surprise when she came home to find not one happy well-fed cat, but two!
by Unknown